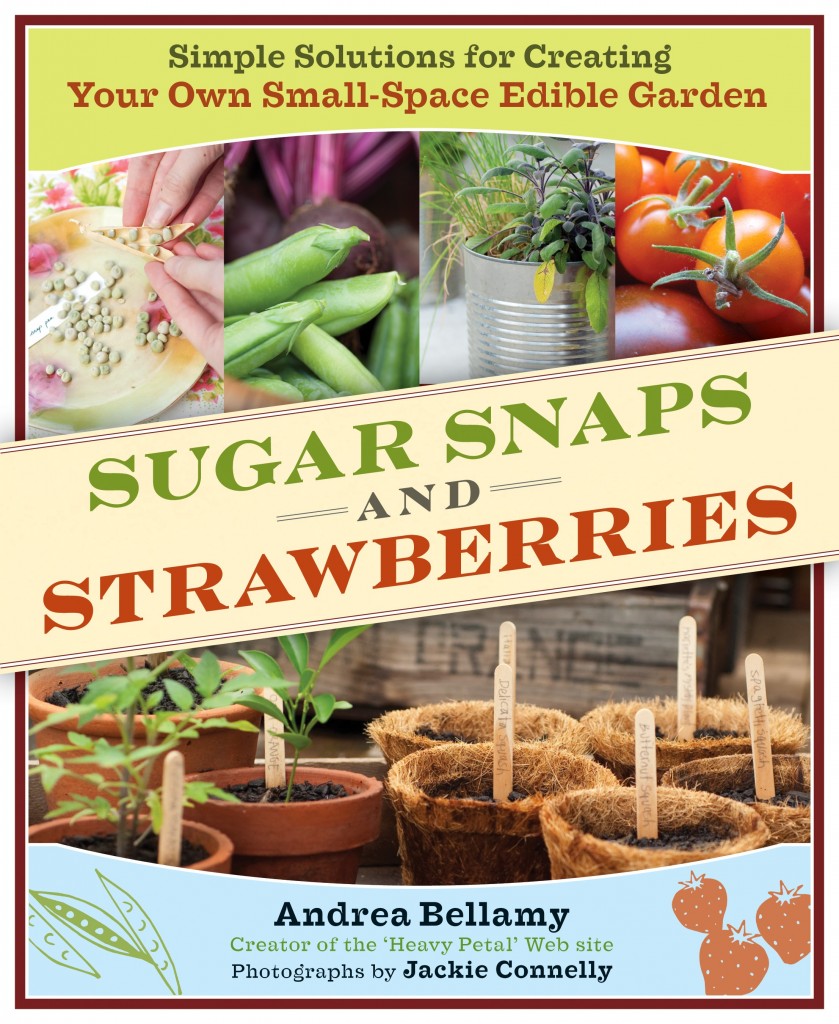 I am thrilled to officially introduce my book, Sugar Snaps and Strawberries: Simple Solutions for Creating Your Own Small-Space Edible Garden.

This book has been a long time in the making, and I’m not even talking about the years spent learning how to grow edibles, or garden organically (or how to string a coherent sentence together, for that matter). It feels like forever since the idea for Sugar Snaps germinated, ’til now, when I can finally share it with you.

It all started when I was a few days overdue with my daughter: around mid-April 2008. I got an email from Juree Sondker, an acquiring editor at Timber Press. For those of you not familiar with Timber, it is the garden book publisher – they’ve created many of the world’s top-selling books on gardening, horticulture, sustainability, and the Pacific Northwest. The authors they publish are accomplished, brilliant, and well respected. So what did they want with me?

They wanted to know if I’d ever considered writing a book.

After I stopped shrieking and doing exuberant high kicks (not an easy feat when you’re 41 weeks pregnant, I assure you), I responded. I wrote something to the effect of, “I’ve always wanted to write a book, however, I’m just about to pop out a kid. Can I get back to you when I determine the extent to which my life is about to totally change?” But I was already writing that book in my head.

It’s true: I have always wanted to write a book. It’s been number one on my life list for years. In fact, there’s a mortifying video floating around out there (thankfully on VHS) taken on the night of my high school graduation. The videographer asked everyone to say where they were going to be in 10 years, and I said something about living in a VW van and creating world peace. I KNOW. And I was completely sober. But I also said I was going to write a book. And now, just a few years later (ha!) I can check that off my list. Done.

After that initial contact with Juree, I spent my entire year’s mat leave (yep, that’s one full year of paid leave. God bless Canada) working on a proposal for the book, which I called Homegrown. Now, a little after a year later, the book is written, the photographs are taken, and I’m looking at page proofs of the most beautiful veggie gardening book ever. Seriously, this thing is gorgeous.

I do want to talk about how this book actually got written, but this post too long already. Soon, I’ll show you sneak peeks at some of the inside pages, and let you see some of Jackie Connelly’s amazing photos. They are truly stunning.

Unfortunately, there’s still a bit of a wait until the book actually comes out (in late December 2010). But it is available for pre-order on Amazon.com and Amazon.ca, which is wild, and also nerve wracking (people are actually going to read this!?) Of course, I’d love if it you did.

The big reveal: announcing The Book

There is a Season