I have kind of a love-hate relationship with mushrooms. I grew up loathing them; being forced to try “just one more bite” before I could leave the table. Now I largely like them; shiitake, oyster, enoki… anything but the bland, styrofoamy “white mushroom.” Oh, and they all have to be cooked before they cross my […]

You Grow Girl, a website dedicated to – you guessed it – gardeners of the female persuasion, has a good blog. What’s neat about it is that it’s written by a dozen or so gardeners from around the world (well, North America, Australia and the UK anyway). The most recent post is about seed saving, […]

Apple season is in full swing here in B.C., which brings loads of fresh apples to our farmer’s markets and grocery stores. If you came home with just two or three of the 30,000 lbs of apples that were sold at the UBC Apple Festival, you’re probably going to want to check out All About […] 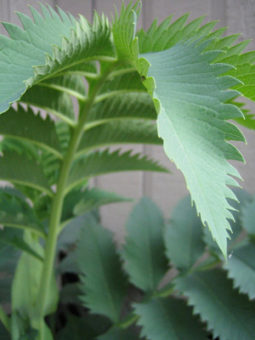 From the Cute-but-impractical File: Egglings (from Japan) look and feel like a real egg, but are made of white porous ceramic. Kids (or adults!) just crack it open, add water and sun… and voila! Basil, thyme or Italian parsley at your fingertips. Plants grow for up to five months in the eggling’s fortified peat mixture, […]

Chocolate. Plants. Put ’em together and you’ve got one of the hottest trends in gardening. If it weren’t enough that there are a number of plants with “chocolate” in their name, (Heuchera ‘Chocolate Ruffles’ and Eupatorium rugosa ‘Chocolate,’ for example), there are several plants that smell like chocolate as well. Here are a few of […]

Never thought I’d say it, but I’ve found a diet I can fully endorse. Fellow Vancouverites Alisa Smith and J.B. MacKinnon are halfway through their one-year committment to the Hundred-mile Diet. No, it has nothing to do with the town named for the hundredth mile on the gold rush trail (my mom, whose parents dragged […]