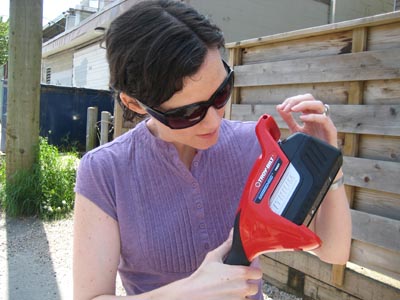 A little while back, Troy Bilt sent me their new TB57 Lithium Ion Battery Cordless String Trimmer to try out. That’s me, above, holding it gingerly and looking like I’m about to stroke its hair. What can I say? I’m not all that familiar with power equipment – I felt it best to approach with caution.

But before I get into my review, I wanted to reassure you that whenever I’m given something – whether it’s a book or a plant or a trimmer – I’m always honest about my experience with that product. I told the folks at Troy Bilt the same thing, and they were happy to hear it. They look for feedback and incorporate it into later models of their products. I like that.

So, without further ado, here’s what I liked about the trimmer (which, in my brain, will always be called a weed whacker):

* Unlike gas trimmers, this trimmer produces zero emissions. And unlike electric trimmers, there’s no cord.

* The rechargeable lithium ion battery really holds its charge – and the machine retains full power along with it. I’ve used it three times for between 10-30 minutes and it’ll still be good for another round. While I haven’t needed to recharge it yet, apparently that process takes just one hour.

*It’s convenient – there’s no cord to wind up or untangle, and no gas to refill. Just pick it up and go.

This is almost the perfect trimmer for small space gardeners or those needing light-duty weed whacking done. It’s awesome for edging lawns, but save nastier tasks such as battling areas overgrown with hardcore weeds for a heavier-duty tool. Gas and electric trimmers still out-perform in terms of sheer power.

Now you’ll notice that I said *almost* the perfect trimmer. There are a couple of things I’d like to see changed with this model. 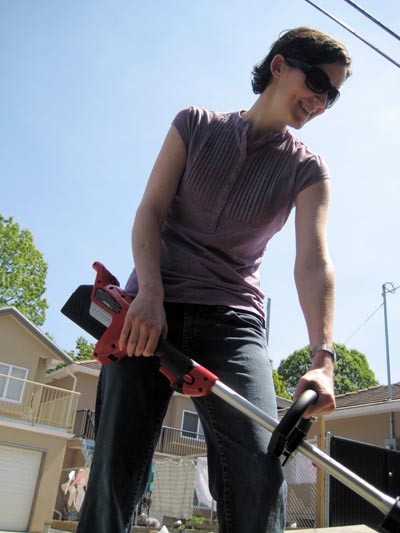 The first, something that seems to be universally annoying among weed whackers, is that the arm is too short, forcing me to have to stoop over to get at the weeds. Despite the fact that I literally look like a giant in this photo, I’m only 5’10 — tall for certain, but presumably guys are in the target market for this device, too. The arm could easily use another 6-8″. 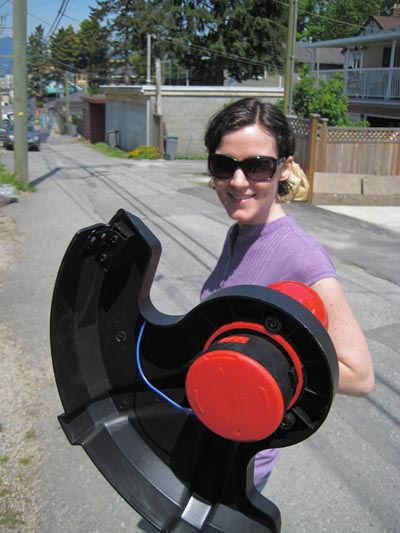 My other comment on this product is that its efficiency could be improved with the addition of a double line, which seems like it’d be simple enough to add.

Fix those couple of things, Troy Bilt, and you’ll have created an ecologically sensitive, powerful little machine. Who knows? If I had a lawn, I’d probably buy one.

Is your garden contributing to climate change?

My mom grows the best weed