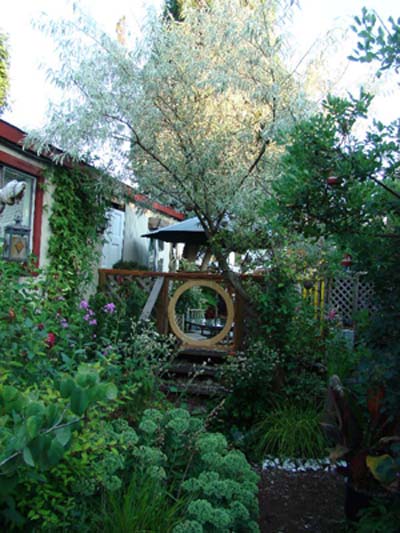 Inspiration: A forested, box canyon
Favourite element: Peaceful ambiance
Favourite plants: Lilies, tellimas, hostas, Michaelmas daisies
Biggest challenge: Narrowness of the lot
Biggest save: A large, de-potted pine tree that was a cast-off from a nursery
Biggest splurge: The Russian Olive shade tree ($200)
Advice for others: Be careful what you accept from others – Welsh poppies are taking over the garden!! 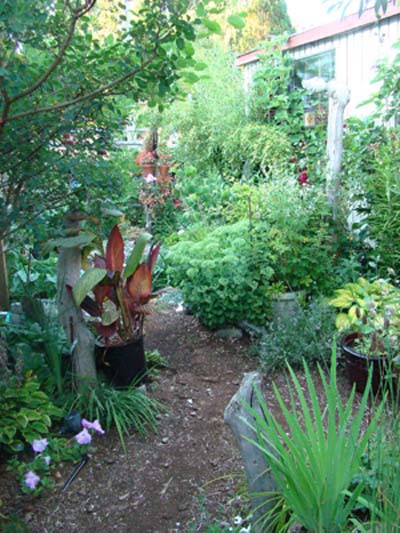 Plants press in against pathways, achieving Gordon’s aim of making his garden feel like a box canyon.

Heavy Petal says: I’m delighted to be able to share Gordon’s garden with you today in this, the first garden tour of the year. In global terms, Gordon is almost a neighbour of mine: he lives on the east coast of Vancouver Island just over 200 km away. I wish he were an actual neighbour; he seems like a pretty handy fellow to have around, and is a true plant-a-holic.

What I love most about this story is Gordon’s resourcefulness. This is a guy, who, faced with a barren lot, lack of funds, and a pent-up need to collect plants after 15 years living on a sailboat, collected seeds and plants from back alleys and building sites, and even got a part-time job at a nursery so he could take advantage of employee discounts. (Come on, we’ve all thought about it!) 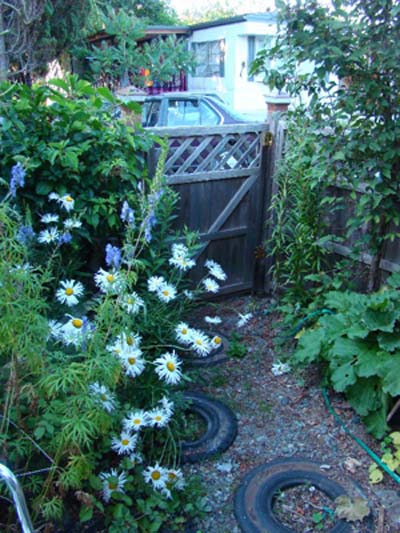 Here, at the back gate, you can see how close the neighbours are. Living screens do a great job of providing privacy.

Money wasn’t the only constraint. The lot was long and narrow — making its design awkward. His trailer park had a fence height limit of four feet,  and the neighbouring trailer was just a little too close for comfort. As well, a huge underground concrete septic tank sat just four inches beneath the centre of the yard!

Gordon wanted a private garden, so he quickly set about building fences (keeping to the four-foot height limit) to contain his dog and to provide privacy. He planted donated raspberry bushes on the outside of the fence and a Virginia Creeper vine on the inside. Within a couple of years, these had both grown to well over four feet high and were providing privacy from the trailer behind him. 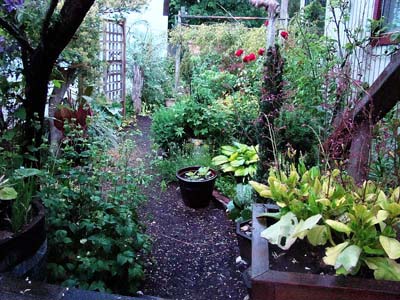 To deal with the septic tank, Gordon built up a pile of compost and soil to a height of two feet over top of the tank and built a rough stone wall along the route of his pathway to hold the soil in. This later became a rock garden. In the middle of this mound, he set pieces of driftwood on end to resemble an old stump and planted a small flowering tree in the centre. This all added to the height of the tree.

The last difficulty, the long, narrow shape of the yard, was solved by fashioning the garden to resemble a box canyon. Says Gordon, “All I had to do was to cover the vertical walls with greenery!” What you see here is the result, seven years later. 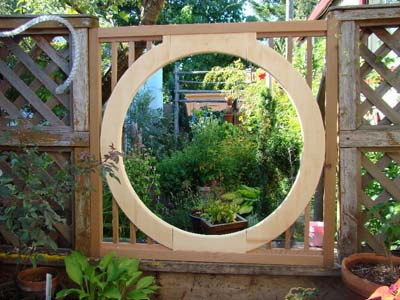 The moon gate offers glimpses of the garden beyond.

You can see many more photos of Gordon’s garden here. Thanks for sharing this inspiring garden with us, Gordon!

Like this tour? Check out the other garden tours on Heavy Petal. Then share your own garden with Heavy Petal readers: take us on a garden tour.

Submit your garden! Take us on a garden tour.