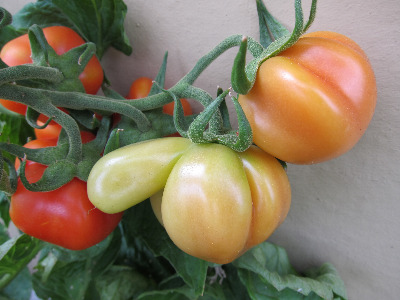 I’d like to introduce you to some of the tomatoes I’ve been harvesting this year.

I grow tomatoes every year, without fail. They are a must-have, even though they take up a significant portion of my growing space. For me, the major problem with growing tomatoes isn’t blight or blossom end rot. It’s choosing only four or five varieties to grow out of the many hundreds available. I agonize over my tomato selections. Do I grow a favourite from last year’s harvest? Or try something new? Usually, I opt for new—always on the search for the Best Performing, Best Tasting tomato. This year, I grew five varieties, two of which I’d grown before. 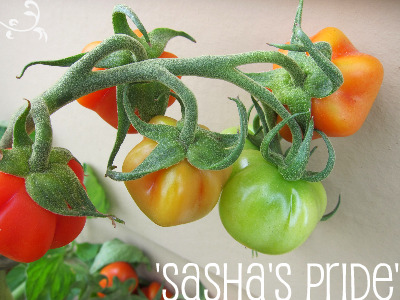 This is one of my new ones. ‘Sasha’s Pride,’ also known as ‘Sasha’s Altai,’ is a Russian heirloom with a great story. It’s an indeterminate (vining) early-ripening tomato with clusters of golf ball-sized fruit. Though I think it’s a beautiful plant, with its velvety stems and pagoda-shaped fruit, I find the flavour a little mild for my taste and probably won’t grow it again. Apparently I’m unusual, however, because Organic Gardening magazine rated it one of the top 10 early ripening tomatoes. 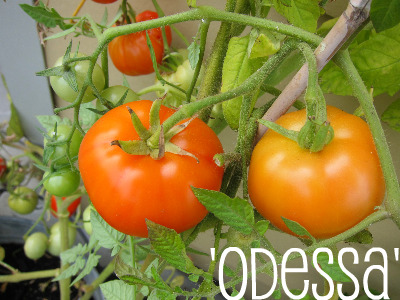 ‘Odessa’ isn’t going to win any beauty contests, but it makes up for the cracks it always seem to develop by ripening extra early and performing well. This is the second year I’ve grown this variety, though I think I’ll skip it next year in favour of looking for another early season tom that doesn’t split. ‘Odessa’ is also an indeterminate heirloom. Its fruits range from the size of golf to tennis balls. 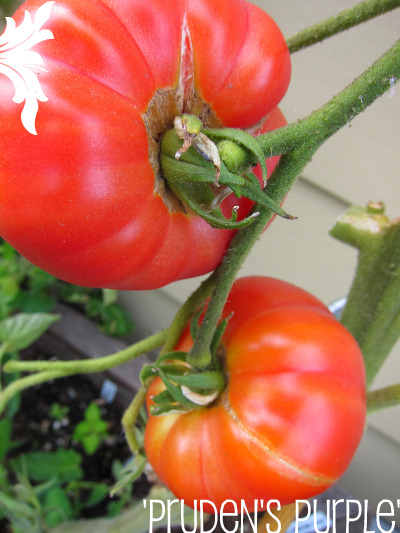 Every year I grow one large-fruited tomato variety. Something wrinkly and any colour but red. You know, something that screams “heirloom!” This year it was ‘Pruden’s Purple,’ but in the past I’ve grown possibly every readily-available type of Brandywine, ‘Purple Calabash,’ ‘Radiator Charlie’s Mortgage Lifter’ and more. And because I’ve grown all these tomatoes, you would think that I would know that they just don’t work in my climate. They ripen too late. They want more heat, and they want it to last longer. So let it be known: this is the last year I will attempt to grow such elusive beauties. From now on, I’ll stick with smaller, early-season varieties. Sure, I got four or maybe even six toms off ‘Pruden’s Purple,’ but for the size of this plant (it’d reached 6′ by the time I lopped off the top) I wanted bushels. 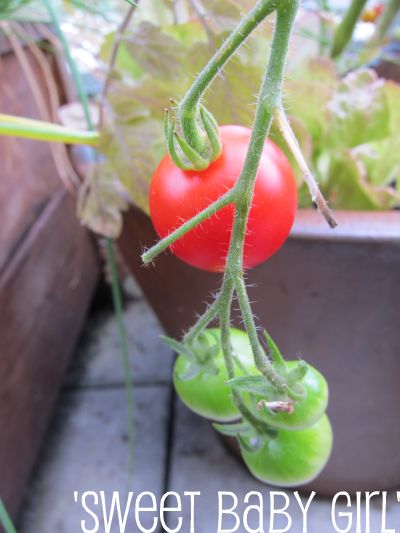 I wasn’t planning on planting ‘Sweet Baby Girl,’ but when my mom brought over an extra seedling that was already miles ahead of what I had growing, I had to find a space for it. I’m so glad I did. ‘Sweet Baby Girl’ is a hybrid determinate (bush) cherry tomato that has the absolute sweetest tomatoes I’ve ever tasted. Seriously, they’re like sugar: there’s no hint of acid. Will I grow it again? Absolutely. As long as my mom buys the seed again! 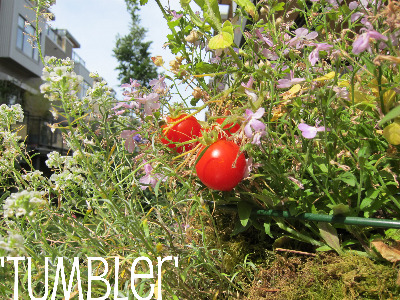 Finally, I grew ‘Tumbler.’ Known as the hanging basket tomato, I picked up a ‘Tumbler’ seedling on a whim and tucked it into the basket I was making. ‘Tumbler’ is a hybrid bush tomato that produces small (1′-2′) fruits in clusters. This is the second year I’ve grown it, but the ones I started from seed last year did far better than this year’s, purchased at a nursery. I love the novelty of growing a tomato in a hanging basket, but the flavour of ‘Tumbler’ (bland) doesn’t cut it. I won’t grow this again.

What are your tomato stand-outs this year? Any suggestions for early-season tomatoes I should try next year?