You are here: Home / Veggies & Edibles / Now Harvesting: Early October (plus reflections on the Three Sisters) 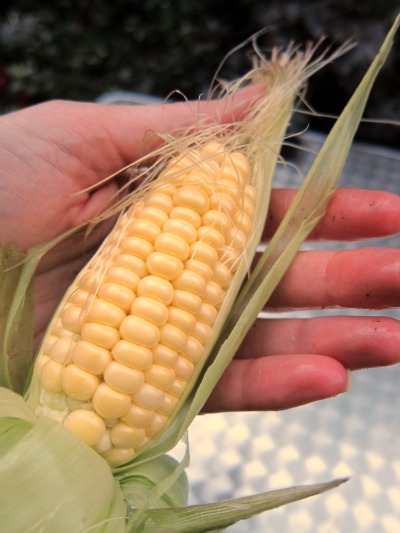 Before you scoff at my teeny corn, let me explain. This corn almost didn’t make it. At each turn, my crop was beset by terrible weather and thieves. The remaining six baby cobs almost didn’t get harvested, and thus, almost didn’t make it onto our dinner plates last week. Which would have been a gross travesty, because they were terrific.

I planted a block of ‘Sugar Buns’ corn in my community garden plot in early June after pre-sprouting the seeds (to ensure germination in our unseasonably cold, wet soil). Because my plot is small, the block of corn was, by necessity, small. I think I planted 4’x3′ for a total of 12 plants. After the corn finally reached 4 in. (10cm) high (which took FOREVER; this June was surely the coolest on record), I planted ‘Fortex’ beans next to each emerging corn stalk and ‘Black Beauty’ zucchini at the edges of the plot. My plan? To grow the Three Sisters: corn, beans, and squash.

The Three Sisters companion planting technique was first practiced by North American indigenous groups. The corn stalks provide vertical support to climbing beans, while in turn, the beans supply nitrogen to the corn and squash. The squash shades the soil, retaining moisture, while its prickly vines discourage squirrels and raccoons from accessing tender corn cobs—at least in theory.

I wouldn’t say it was completely successful for me, largely because of the slow start to summer we experienced. Corn needs really warm soil to truly thrive, and mine didn’t get that until at least mid-July. The beans quickly outpaced the corn, and I ended up adding a few poles to support the more vigorous vines. And while the zucchini might have kept squirrels and raccoons from my corn, it didn’t stop human pests, which took the earliest and biggest cobs. At that point (mid-August) I considered ripping out the corn (because surely it wasn’t going to produce a second crop by the time the weather cooled) but left it in simply because many of the stalks were supporting beans.

I’m glad I did. Last weekend, when I finally decided to replace the corn, beans, and zucchini with spinach and mache, I decided to open up the tiny cobs that had formed in spite of my predictions. And wouldn’t you know it? I had corn! I thought I’d find shriveled, unpollenated kernels, too small and hard to be edible, but instead I found plump, yellow pillows just waiting to be cooked and slathered with butter. Of course, I obliged.

One last thing: yes, I chose ‘Sugar Buns’ largely because of the name!

What are you harvesting now?