You are here: Home / Green Gardening & Living / Eating your weeds 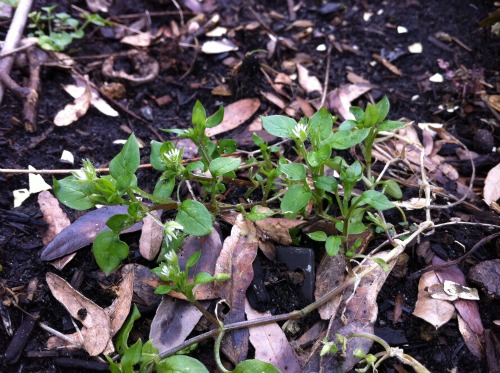 As I was weeding the salad garden yesterday, I found several small clumps of chickweed (Stellaria media). Appropriate that it was in the salad garden, because fresh, young chickweed makes a fabulous addition to a spring salad.

Now, I know what some of you are thinking. Oh god. I know where this is going. I am so *not* going to start “wild harvesting” lamb’s quarters and dandelion greens. And skeptics? I know where you’re coming from.

In fact, the original manuscript for my book included a sidebar on edible weeds, which I scrapped when I realized that as crunchy as I enjoy my granola, I’m not a let’s-make-“coffee”-out-of-this-dandelion-root kind of gal.Part of my hesitation, I think, is that weeds are often found in the unfriendliest of environments. At the side of the road, at the base of street trees (dog urine, anyone?), industrial wastelands… And then there’s the fact that invasive species such as Japanese knotweed may have been treated with a chemical herbicide. Who wants to take their chances with that?

But growing in my garden, in soil of which I know the heritage? I’ll eat that.

So here we go: a very select list of edible weeds.

Chickweed (Stellaria media), a low-growing annual with small star-shaped white flowers, has a mild flavor that is extremely tasty in a salad.

The young leaves of the common yellow-flowered dandelion (Taraxacum officinale) can be used in salads or sautés. Its roots can also be harvested, dried and roasted to make a coffee substitute (or so I hear. I’ll stick with my Americanos, thanks).

When cooked or dried, stinging nettles (Urtica dioica) are edible! Use only the young leaves (and wear thick gloves when harvesting). Use in place of spinach or other greens in soups, quiches, and sautés.

Purslane (Portulaca oleracea) is a sprawling annual that can be served raw in salads or sautéed.

Japanese knotweed (Polygonum cuspidatum) is brutal in the garden, but this rhubarb-flavored thug makes a decent pie filling. Collect the shoots in the spring when they first emerge and are still tender, then strip off the leaves and slice up the shoots. Steam or boil the shoots and serve like asparagus, or use them in a pie or cobbler.