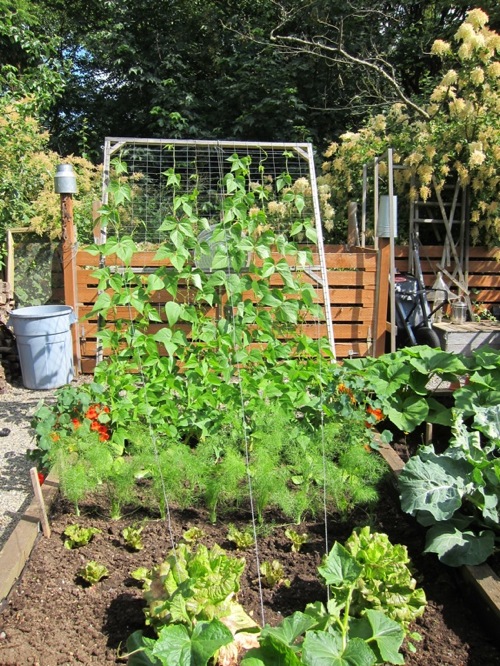 Beans are one of summer’s simple pleasures, on par with picnics and outdoor pools, bare feet and blackberries. While a farmer’s market loot bag of tender, local string beans is an undeniable delight, fresh-picked, homegrown beans can elevate a basic weeknight supper to a thing of beauty. And growing your own? Easier than you’d think.

Unlike many of our other warm-season crops—tomatoes, peppers, eggplant—beans are easy to start outdoors from seed, and equally easy to grow. In fact, the hardest part of the whole process might be choosing which type to plant. Beans are classified as snap or shelling, and either bush or pole. Beyond that, there are endless distinctions, including variations in colour ranging from wax (yellow), green, purple, and even speckled or streaked.

I am easily lured by a quirky or intriguing name, choosing beans for monikers like ‘Dragon Tongue,’ ‘Jacob’s Cattle,’ or ‘Scarlet Emperor.’ But if you like your romance served with a side of reason, there are a few things to consider.

Grow snap (also known as string or green) beans for their succulent, immature pods, or shelling beans (including edamame and soup beans) for their fresh or dry seeds. Grow compact, self-supporting bush types if you intend to can or freeze your harvest, or if you’re growing only a few plants; bush beans tend to produce a large crop during a concentrated period of harvest. Their small size also makes the plants suitable for container growing. Grow pole beans if you prefer smaller daily harvests over a longer period of time, or if you’d like to take advantage of their climbing habit. Pole beans also make attractive and clever use of vertical space.

Beans can be direct sown in the garden now through the end of June, in warm, well-drained soil. Pre-treating seeds with legume inoculant, a powered form of beneficial bacteria found at nurseries and garden centres, will encourage healthy growth. Choose a sunny locale, and pre-moisten the soil prior to planting. Push seeds into the soil to a depth of 4cm, spacing them 8cm apart. Set up a teepee or trellis for pole and runner beans at the time of planting. Avoid watering until you see sprouts appear (usually within a week).

Harvest every second day to encourage production, clipping off the pods of snap beans while they are still small and tender. Once the seeds start to swell, the pods become woody. No matter – you can always shell them and use as you would edamame or other shelling beans.

Some of my favourite beans include stringless, slender ‘Fortex’ (snap pole) and ‘Maxibel’ (snap bush); I also like ‘Purple Peacock’ and ‘Kentucky Wonder Wax’ snap pole beans for the plum and gold tones they introduce to the garden and the plate. ‘Sayamusume’ soya bean makes great edamame, while heirloom ‘Tiger’s Eye’ can be eaten as either a dry or shelling bean, or, if harvested early enough, as a snap bean. Whichever variety you choose, you’ll soon add “growing beans” to your personal list of summer pleasures.

A garden checklist for summer