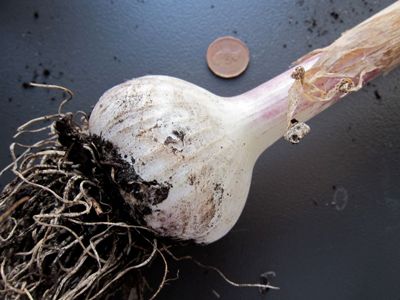 Finally! Something other than greens. This week marked the first garlic harvest. A couple of weeks ago, I noticed that my garlic (about a dozen heads grown at the community garden) had a major case of rust. Rust is a fungal disease that looks exactly like – you guessed it – rust.

Not having personally encountered rust before (another day in the garden, another disease!) I turned to my trusty friend, The Organic Gardener’s Handbook of Natural Pest and Disease Control, an incredible and thorough resource. Unfortunately, it delivered bad news. Rust, it said, often affects yield. (What?! No garlic harvest, after giving it space in my garden since last October?). The best remedy? Avoid planting members of that plant species where the rust occurred; the spores can be carried in the soil. That means no alliums in my community garden plot for for two-three years. Bummer. 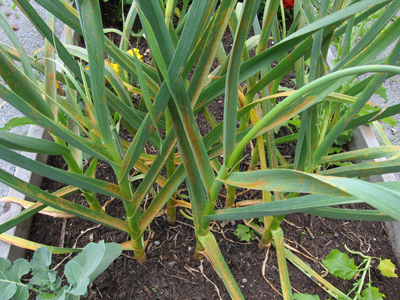 This, my friends, is rust. (Actually, this was in the early stage. A week later, almost the entire crop was orange.)

My garlic wasn’t quite ready (garlic is ready to harvest when the bottom three-four leaves die back; only the bottom-most leaf was brown on mine), but I decided to chance it, rather than let the rust take over.

I’m glad I did. Here’s a shot of one of the heads – ‘Russian Red,’ I believe. It’s a respectable size and is drying nicely. I’ll just give it a week or so until the skins are dry, and then, look out! I’d better stock up on mouth wash.