You are here: Home / Veggies & Edibles / How to grow potatoes and garlic and make Roasted Garlic and Potato Pizza 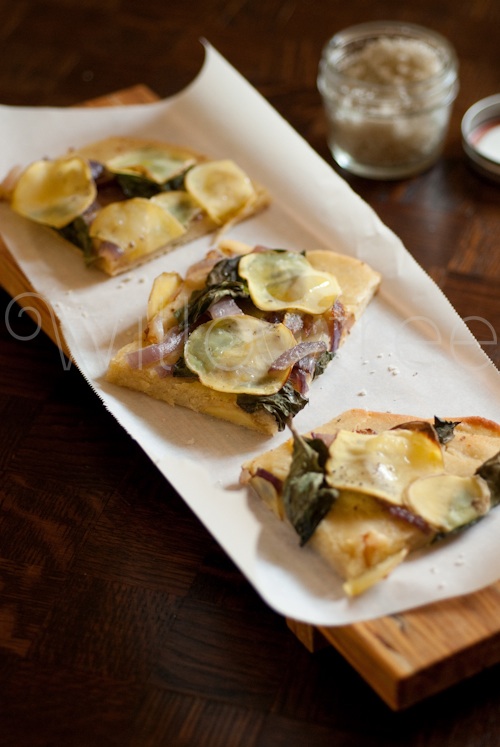 Every month, Heavy Petal collaborates with Willowtree — a website for those with food sensitivities who want to find their culinary bliss — to bring you a celebration of an in-season edible. I’ll tell you how to grow it; they’ll tell you how to eat it. Yay!

Until recently, I was a pizza purist, shunning over-the-top toppings in favour of a simple margherita or capricciosa. Then someone convinced me to try a slice of potato pizza, and I was hooked. And really, what’s not to like? Pizza and potatoes are perfect comfort foods, and together, they’re simply fabulous.

Preheat over to 350˚. Make Willowtree’s Eggless, Gluten Free Pizza Crust (you’ll use half the dough for this Roasted Garlic & Potato Pizza recipe, and freeze the other half to have ready in a pinch for later).  Once you’ve reached the end of this recipe and your crust is baking for its first 10 minutes, start on preparing your toppings (we found it helpful to set a timer for our crust here, while moving onto our toppings).

Cut the top off of the garlic bulb to reveal the cloves, drizzle with a touch of olive oil, then place it in small dutch oven or covered oven-safe dish to bake for approximately 30 minutes. Once baked, remove and set aside.

Meanwhile, slice the onion into half moons. Over medium heat, coat a saucepan with olive oil and once warm, add the onions evenly into the pan. Stir occasionally for approximately 20 minutes or until golden brown and caramelized. While the onions are still cooking, use a mandolin to thinly slice the potato (if you don’t have a mandolin, you can use a very sharp knife); the goal is to slice the potato paper thin. Your onions should be caramelized now; remove them from the heat and set aside, along with the thin slices of potato.

Now that all your pizza toppings are prepared and your pizza crust(s) baked, you can assemble your pizza either to be baked on a pizza stone, or a greased pizza pan. Remove the pizza crust(s) from the oven, and turn the heat up to 425˚. Brush the baked pizza crust(s) with generous amounts of olive oil and sprinkles of course sea salt. Using a fork, remove the roasted garlic cloves from the bulb and spread over the crust. On top of this, spread the onions and place the basil leaves so they cover the entire pizza crust. Lastly, lay the potato slices a few layers thick over the basil. Drizzle with a touch of olive oil and sprinkle with additional course sea salt and pepper. Place the pizza(s) in oven and bake for 10 minutes. Remove, cut into squares, serve and fall in love. 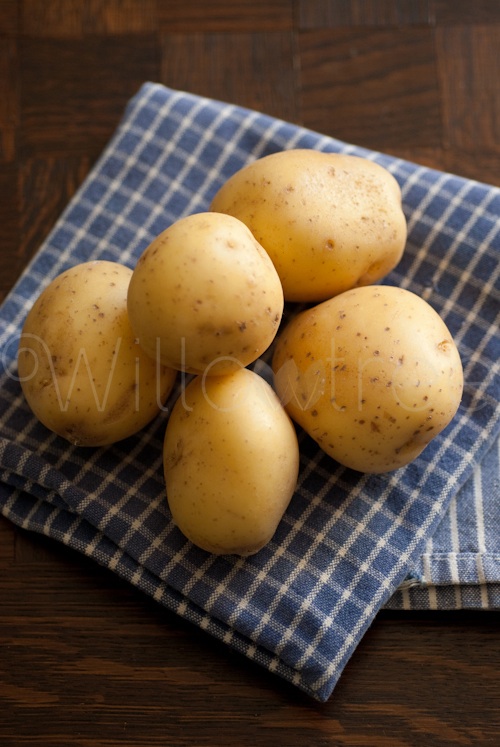 Potatoes are one of my favorite low-maintenance crops to grow (garlic is another). Start them in early to midspring by setting seed potatoes (or unsprayed farmer’s market potatoes) 12 in. apart and 4 in. deep in a sunny spot. Potatoes prefer rich, fertile soil that is slightly acidic. If your soil is neutral or alkaline, amend it with sulfur. Don’t add lime. Soon, you’ll spot green shoots appearing above the soil. As the plants grow, continue to add soil at the base of the stems. Potatoes will develop along the stalk as the plant grows upward. You can harvest new (baby) potatoes as soon as flowers appear on the plants. Once the foliage begins to die, full-sized potatoes are ready for harvest. Gently dig them up, brush them off, and store in a cool, well-ventilated area.

Garlic is planted in late fall, or any time up until first frost. It wants full sun and fertile, well-drained soil. Choose garlic bought from your farmer’s market or local seed company, looking for heads with the largest cloves (which will in turn produce larger heads. Separate the cloves just before planting (don’t remove the outer skins!) and plant—pointy-end up—2 in. deep and 6 in. apart. The shoots will begin to appear in late winter. Once the bottom half of its leaves have dried (usually in mid-summer), garlic is ready for harvest. To harvest, gently dig up the bulbs, brush off any remaining soil, and hang in a cool, dark, well-ventilated place until the skins are dry.

Fresh from the garden: How to grow rhubarb and make a yummy rhubarb apple crumble

How to grow radishes and make grilled tuna with radish salsa