You are here: Home / Veggies & Edibles / How to grow tomatoes and make tomato gazpacho 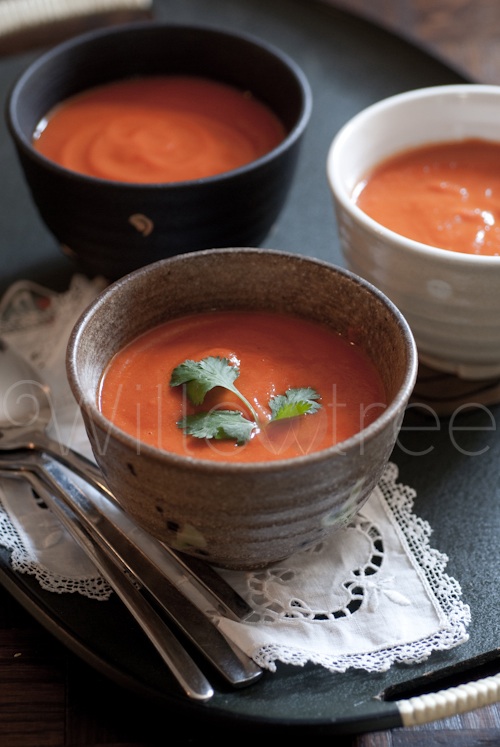 Every month, Heavy Petal collaborates with Willowtree — a website for those with food sensitivities who want to find their culinary bliss — to bring you a celebration of an in-season edible. I’ll tell you how to grow it; they’ll tell you how to eat it. Yay!

If your garden is like mine, it’s overflowing with tomatoes. It’s about this time of year I start looking for new tomato recipes. Thanks to the Willowtree gals, I’ve got a keeper.

Splash of extra virgin olive oil
1/2 a large red onion
2 cloves of garlic, diced
1 tbsp each sage and basil, finely chopped
Salt & pepper to taste
1 cup of water
3 – 28oz cans of tomatoes (Willowtree recommends using canned plum tomatoes, but you can use stewed or diced if you prefer) *In season tip: You can substitute approximately 10 fresh tomatoes per each can of tomatoes.
1 large red pepper

Heat oven to 500˚F. Slice your red pepper in half, removing the stem and seeds, and drizzle with some olive oil. Place on a baking sheet in the oven until soft and slightly charred on the edges.

Meanwhile, in a large pot, combine the olive oil, red onion, and garlic over medium heat. Continuously stir until the onion is translucent (about 5-6 minutes) being careful not to let the garlic burn. Add the sage, salt & pepper, water, red pepper, and tomatoes (if using fresh tomatoes, chop before adding to the pot; if using canned, crush with your hands or roughly with a potato masher) to your pot. Quickly stir the ingredients together and let simmer over medium heat for 30 minutes, stirring occasionally.

After 30 minutes, remove from stove top and, using a hand blender, blend the ingredients until the soup has reached your desired consistency (we prefer a few seconds less than totally smooth, but this part is up to you). Allow the pot to cool for an hour or two on the counter, then transfer to a bowl, cover, and refrigerate overnight.

The next day, garnish each bowl with a sprig of cilantro, serve with a glass of white wine, and enjoy in the late summer sun. 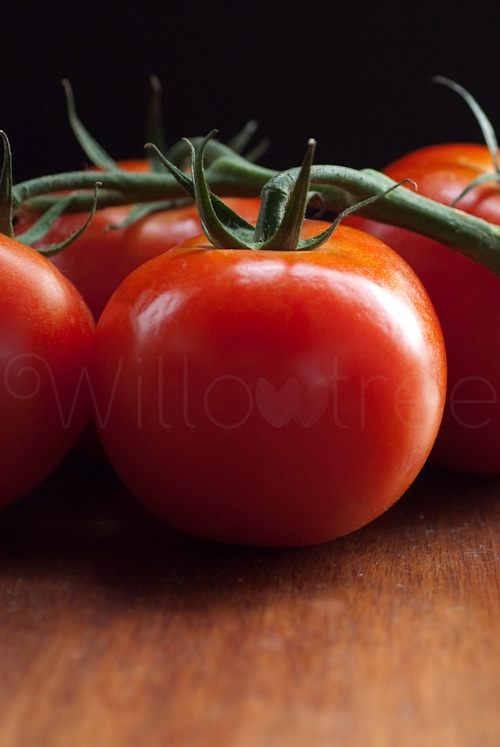 How to grow tomatoes

Whole books have been written on how to successfully grow tomatoes, but the basics are easy. Tomatoes want full sun, nutrient-rich soil, consistent watering, and heat. Buy seedlings (or start your own from seed indoors six to eight weeks prior to the last frost in your area) and set them outside once the weather has warmed. Unlike most plants, tomatoes can be planted deeply; bury them up to their first set of leaves. This will encourage roots to develop along the buried stem (which in turn will develop healthy root structure).

Tomatoes come in two main varieties: vining (or indeterminate) types grow super tall and produce fruit throughout the season. Bush (or determinate) types are shorter (making them more suitable for container growing) and produce their fruit all at once. Vining tomatoes produce “suckers,” stems that develop between the leaf branch and main “trunk” of the plant. These should be pruned out as they appear to prevent the plant from becoming an unmanageable beast.

Avoid splashing the leaves when watering tomatoes. Wet foliage can lead to a fungal disease known as late blight. If you live in a rainy climate, grow your tomatoes in containers under an overhang or in a greenhouse.

Ripe tomatoes come away from the vine with a gentle twist. Enjoy fresh, or dry them in the oven for later use.

Fresh from the garden: How to grow rhubarb and make a yummy rhubarb apple crumble

How to grow radishes and make grilled tuna with radish salsa